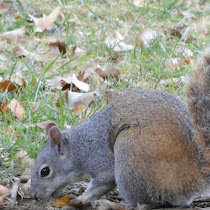 To collect photographic evidence of sightings of Western Gray Squirrels in California coupled with the following data: Date, time of day, weather, elevation, latitude and longitude (or exact location described with reference to points that can be found on Google maps), gender (if possible). Behavior (what was it doing?): resting, eating, running, chasing other squirrels, digging, climbing a tree, etc. Sign in to join mission

I am investigating morphological and behavioral differences of the three Western Gray Squirrel subspecies, anthonyi (S. Cali), nigripes (Coast range S. of San Francisco), and griseus (N. Cali, Sierras, N. Coast range). My secondary goal is to collect incidence data on a previously undescribed coloration found in some Western grays. The abnormal coloration presents itself as a reddish to blondish patch or patches on the rump, thighs, back, and tail. The abnormality does not include reddish patches on the backs of the ears (that is normal). The coloration also should not be confused with the Eastern Fox squirrel or the Eastern Gray squirrel, both of which have yellow/brown/red coloration on some parts of the body.