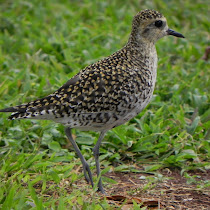 During Invasive Species Awareness Week, March 4-10, participants from across the state of Hawaiʻi can ask "Whatʻs in my backyard" and get answers from local biologists and the Project Noah community . Take pictures of plants and animals (terrestrial and aquatic) and upload them to the Hawaiʻi Bioblitz mission. Local biologists monitoring the mission will suggest IDs and comment on if the species is native to Hawaiʻi or non-native, and if non-native, whether or not it is considered invasive. Click on the "details" icon below for more information. Please remember you are only allowed to share photos you have taken yourself. Sign in to join mission

Can you name some of the plants and animals you see every day? Are they native? Non-native? Invasive? Hawaiʻi has more than 20,000 native species, many of which are found nowhere else in the world. Native to Hawaiʻi: a species whose ancestor arrived in Hawaiʻi without people or our conveyances (boats, planes). Non-native species: arrived in Hawaiʻi (moved knowingly or accidentally) by people or our conveyances (boats, planes). Hawaiʻi has many non-native species, many of which are helpful, but there are some non-native species that cause harm. Invasive species: A non-native species whose introduction causes or is likely to cause economic or environmental harm, or harm to human health. Find out more at: http://hisaw2013.blogspot.com/p/hawaii-bioblitz-2013.html