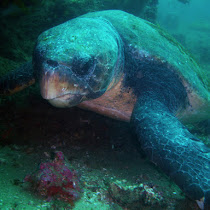 Sea Turtles of the World

Document your Sea Turtle encounters by taking photographs and adding descriptive notes. Explain as much as you can about the location and conditions in the place where it was found and approximate sizes Sign in to join mission

Sea turtles are large, air-breathing reptiles that inhabit tropical and subtropical seas throughout the world. Their shells consist of an upper part (carapace) and a lower section (plastron). Hard scales (or scutes) cover all but the leatherback, and the number and arrangement of these scutes can be used to determine the species. Much can be learned about the condition of the planet's environment by looking at sea turtles. They have existed for over 100 million years, and they travel throughout the world's oceans. Suddenly, however, they are struggling to survive -- largely because of things people are doing to the planet's oceans and beaches. But what does this mean for the human species? It is possible that a world in which sea turtles can not survive may soon become a world in which humans struggle to survive. If, however, we learn from our mistakes and begin changing our behavior, there is still time to save sea turtles from extinction. In the process, we will be saving one of the earth's most mysterious and time-honored creatures. We might just be saving ourselves too. - Text from http://www.conserveturtles.org/