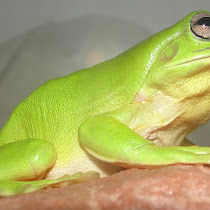 Cane toads (Bufo marinus), aggressive introduced predators of native vertebrate species, will invade the west Kimberley of Western Australia sometime this decade. They will have a destructive impact on the unique fauna and ecosystems of the region resulting in localised extinctions. Some of the iconic species under threat include the Northern Blue-tongue Skink, Yellow Spotted Monitor and the Black Headed Python. Many other species are identified as at risk but lack of baseline data prior to Cane Toad encroachment makes it difficult to accurately quantify their status. It is felt that the Derby community would be remiss in failing to act now and should be proactive in creating a useful longitudinal data base of Iconic Species prior to the imminent arrival of this feral pest. Sign in to join mission

The Derby Landcare Group was started in 2012 by local residents who were concerned that Derby’s valuable natural places were becoming degraded. The groups vision is: “Engaging the community in protecting and enhancing Derby’s unique natural environment” The group's focus is: • Increased community awareness and education • Protecting the marsh • Conserving habitat and biodiversity • Supporting the discovery and enjoyment of Derby’s environment • Environmental improvement through lobbying and advocacy • Maintaining a strong vibrant Derby Landcare Group