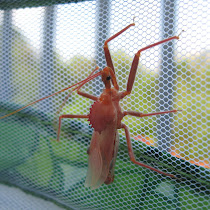 Basically, if your spotting has an assassin bug in it, go ahead and add it to this mission. Please add as much information to your spotting as you can: habitat in which it was found, its behavior, a physical description of the insect, etc. Even if you don't think a certain piece of information is important, go ahead and add it to the notes---you never know what might be useful to know. If you're not sure which species it is, that's an even better reason to add it to this mission! Truthfully, if you catch it and send it to me, I would even identify it for you if that can't be done from a photograph. To summarize: add any and all assassin bugs found in the geographic area of the mission and add as much information to the spotting as possible. Thank you for your participation! Sign in to join mission

The assassin bugs, family Reduviidae, is one of the largest families of true bugs in the order Hemiptera. There are about 7,000 species in this family, and each species is pretty awesome. Assassin bugs are predators of other insects and non-insect arthropods, which gives them an important place in the ecosystem. During my own personal research, I have found that assassin bugs are marvelously interesting creatures and inspire a lot of reactions (good and bad) from people. Since it's such a charismatic group, I see it fitting to devote a mission in honor of the amazing assassin bugs. What's the goal of this mission? At its core, this mission aims to catalog the species of assassin bugs one is likely to see in some of the eastern states. This mission is centered on Ohio, my home state, so the list of eligible states covers all within a 300 mile radius. My dream for this mission is for it to become the #1 resource for finding information about assassin bugs that can be encountered in these eastern states.