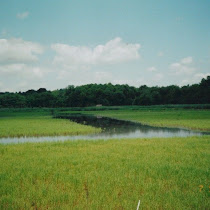 Degraded marsh criteria: Contribute photographs of impaired coastal wetlands. These wetlands should feature non-native, invasive plant species such as Phragmites australis. Eroding banks of Spartina alterniflora are also considered to be signs of impaired marsh health. Restored marsh criteria: Contribute photographs of marshes experiencing habitat restoration. Many marshes in New England are being restored through culvert installations. Please photograph any new signs of native vegetation. Before and after pictures from the same photo station are the most desirable in order to fully document changes in marsh vegetation. Please feel free to upload pictures of any organisms found within coastal wetlands! Sign in to join mission

Salt marshes are grass-dominated wetlands on landscapes that are influenced by tidal waters. These tidal marshes are valuable resources that serve several important functions. Spartina alterniflora, a prominent plant of New England salt marshes, provides habitat for estuarine invertebrates, fish, birds, and mammals. Salt marshes are also nursery grounds for several types of commercial fish and crustacean fisheries. In addition, salt marsh grasses have been shown to protect shorelines from erosion, as well as play roles in nutrient cycling and pollution filtration. Salt marshes within large watersheds that are in close proximity to urban areas have the potential to be a significant sink for heavy metals such as zinc, copper, and lead, preventing contamination of estuarine waters. Despite these benefits, losses to salt marshes have been great. One current study suggests that 37% of New England's salt marshes have been lost due to human activities such as diking and filling of marsh areas. In some places, marshes are unable to keep pace with rising sea levels due to decreased amounts of sediment input. The goal of this mission is to bring attention to areas of coastal marsh that are currently experiencing a dieback of native salt marsh vegetation, are dominated by invasive species such as common reed (Phragmites australis), or are impounded and feature permanent open water. In an effort to show that habitat restoration can be successful, this mission also encourages users to photograph and document marshes that are currently being restored.