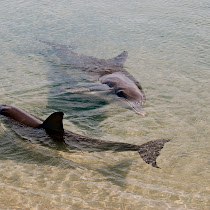 Save the Dolphins - California

Go to www.savejapandolphins.com or www.takeaction/thecove and sign the petition that is going to be send out to our leaders, so they can do something to stop the slaughter. There you can also check out news about our people standing in the front line in Japan, donate and keep up with the achiviements that Rick O´Barry and his crew are reaching throughout the campaing. I thank you now for taking your time to read this and get involved. I am counting on you to reach out and do something about it! Spread the word. Thank you so much Katia Antunes *Edited by Project Noah management team to comply with user created mission rules. Sign in to join mission

Guys I am here to invite you to take action on this important campaing against the brutal dolphin slaughter that happens in a few countries around the world. But this mission is focused on the little town just off Japan's coast called Taiji. Every year from September until March around 20.000 dolphins are driven to this hidden place called THE COVE, by the local fisherman where a few are selected by Dolphins Trainers from different countries so they can perform in shows and the rest of them are brutally killed or worst ... bleed until they die. Their meat is sold all over Asia tagged as whale meat and in Japan the governament distributes the meat for free at children's schools. So we have all different problems here. N1 dolphins are no ordinary animal, they are highly inteligent and social. N2 their meat contains a level of mercury that it's highly toxic to human beings. N3 they are taken from their families to perform at parks such as seaworld and so many others, where they have to beg for food and live in these small tanks which comparing to their homes is just like our kids pool we have in our backyards. Guys this is really important we have to take action and protect these amazing animals future. We are their only hope.