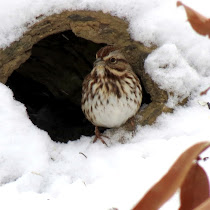 Show plants affected by frost, snow, or ice (examples: a vine with frost crystals growing along its length; a green plant growing through the snow). Show animals playing, living or hunting in the snow, using protective coloration, or playing on or otherwise using ice. Show contrasts between summer coats and winter coats. If applicable, include descriptions and explanations (for example, "These otters are using the ice as a slide into the river"). *Edited by Project Noah management team to comply with user created mission rules. Sign in to join mission