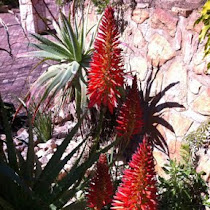 There are five major habitat types in South Africa: fynbos, forest, Karoo, grassland, and savannah. List your spottings according to the habitat with as much as information as possible. Tracking the "spread" of the Southern Africa Aloe worldwide by indicating the country where it was spotted. Sign in to join mission

Tracking and documenting the biology of memebers of the genus Aloe of Southern Africa. The genus is native to Africa, and is common in South Africa, the mountains of tropical Africa, and neighboring areas such as Madagascar, the Arabian peninsula, and the islands of Africa. "Aalwyn" and "Aloe" are the names used in South Africa for memebers of the genus Aloe in the family Aloaceae. Aloes are generally restricted to the African continent but are found all over the world.