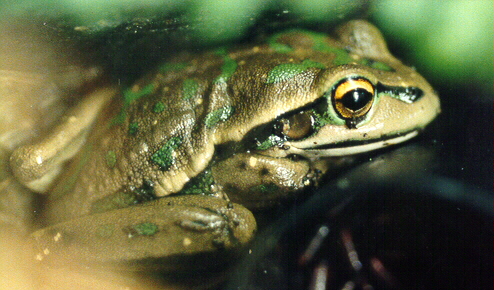 A frog that preys upon other frogs, it is also one of the few frogs known to be active during daylight hours. Adult frogs are found in or close to water. The males call while floating in water - sounding like a motorcycle revving. This frog has notably declined in recent years, and is now Endangered. aurea means “golden” Grows up to 8.5cm

A regionally common frog that preys upon other frogs, actively locating them by their calls. It is one of the few frogs known to be active by day, and actually basks in the sunlight.

Different species than the growling grass frog -similar coloruing but these ones have a smoother exterior. Spotted at home.

That's a nice fat one.
Was this spotted at the Zoo?
AKA Growling grass frog
http://www.projectnoah.org/spottings/805...

This must be Melbourne Australia and not Melbourne USA?