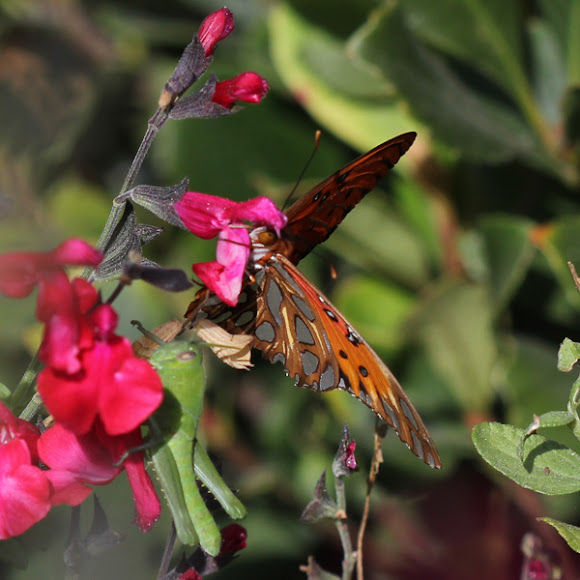 Medium to large (2.5 to 3.5 in wingspan) bright orange longwinged butterfly, with black line designs. Not closely related to other fritillaries. May be identified by underwing spots which are silvery, and appear white in full sun. Upper forewing has white spots circled in black. No white spots appear on upper hindwing - which helps to distinguish this butterfly from the Queen Butterfly.

"The Gulf fritillary is commonly seen in parks and gardens, as well as in open country. Its range extends from Argentina north through Central America, Mexico, and the Caribbean to the southern United States, as far north as the San Francisco Bay Area on the west coast. It is occasional farther north." (Source: Whan, P. W., & Belth, J. E. (1992). Second Ohio record of Agraulis vanillae (Lepidoptera, Nymphalidae). Ohio Journal of Science 92(4): 121–122.)

This butterfly's name comes from its migration over the Gulf of Mexico. It is the only member of genus Agraulis.

P.S. The grasshopper included in the image may be a "Bird Grasshopper" of the genus "Schistocerca" - but I can't be sure. Here's a link to the Bug Guide page on the genus.