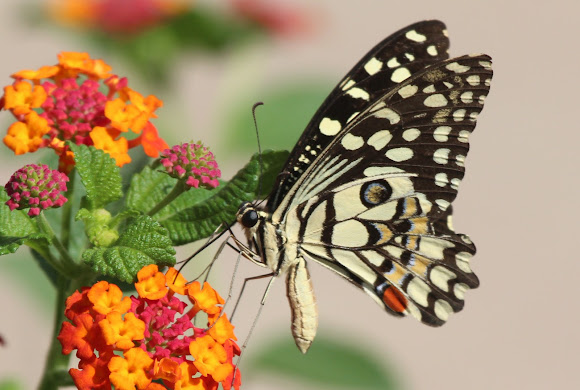 Common Lime Butterfly is a common and widespread Swallowtail butterfly. It gets its name from its host animals, which are usually citrus species such as the cultivated lime. Unlike most swallowtail butterflies, it does not have a prominent tail. The butterfly is tailless and the above background colour is black. This butterfly is an avid mud-puddler and visitor of flowers. It basks with its wings held wide open on tufts of grass, herbs and generally keeps within a metre above the ground, even on cloudy days. It relies on its quick flight for escape. It is an interesting butterfly in that it has a number of modes of flight. In the cool of the morning, the flight is slow considering that it is an edible and unprotected swallowtail. As the day progresses, it flies fast, straight and low. In the hotter part of the day, it may be found settling on damp patches where it will remain motionless, except for an occasional flutter of wings, if not disturbed. It is also a frequent visitor of flowers in gardens, where it shows a preference for flowers of smaller herbs rather than larger plants such as the ubiquitous Lantana with its plentiful blooms. It can be found swarming in the groves of its foodplants.

Seen on a Lantana plant in my garden.

Thanks Aakash. Added to the mission :-)

Awesomely captured!! One of the best photos I have seen.
You can include in 2012 best photo mission.

Yes, Emma we do have some cute butterflies. Thanks!

looks like you have quite a few species of lovely butterflies around!

Added a pic from today's spotting.