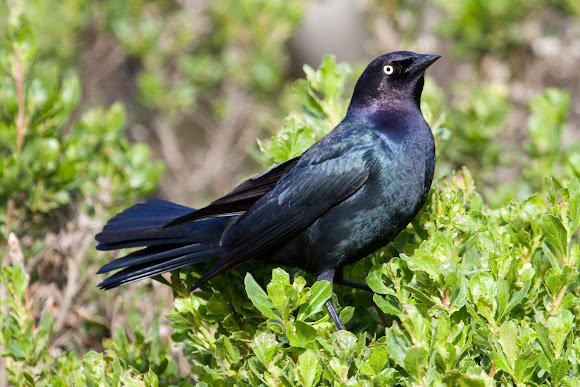 Adults have a pointed bill. Adult males have black plumage; the female is dark grey. The male has a bright yellow eye; the female's is dark. They resemble the eastern member of the same genus, the Rusty Blackbird; however, the Brewer's Blackbird has a shorter bill and the male's head is iridescent purple.[2] This bird is often mistaken for the Common Grackle but has a shorter tail. The call is a sharp check which is also distinguishable.

They forage in shallow water or in fields, mainly eating seeds and insects, some berries. They sometimes catch insects in flight. They feed in flocks outside of the breeding season, sometimes with other blackbirds.

This is a pair. The bird in the third photo is the female.