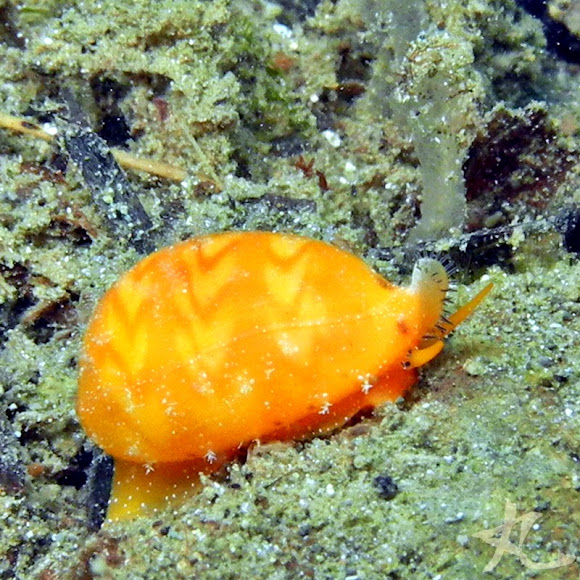 Also referred to as Cypraea ziczac. This small cowry has three latitudinal white bands containing repetitive chevron patterns (appearing like a zigzag) on its outer shell. Its mantle is bright orange and the papillae are white.

This species is distributed in the Red Sea, the Indian Ocean, and in the western Pacific Ocean. Found in intertidal waters up to depths of 5 to 20m, in sandy lagoons and on coral reef, usually hiding under coral and rocks.

Spotted this bright-orange critter crawling at a pretty quick clip at a sand-and-mud site, off the northeastern coast of Samal Island, Davao Gulf. It was in about 15m of water. The cowrie measured less than 2cm.

Cowries are not poisonous. Cone snails are.

@suri.yang.3 -- I know there are some cowries or sea shells that have poisonous appendages that they use to defend themselves. But I'm not sure about this species.

very beautiful! Is it poisonos?

Haha! Yeah, it did look very cute when I saw it.

Finally got this cowry identified! Yay!