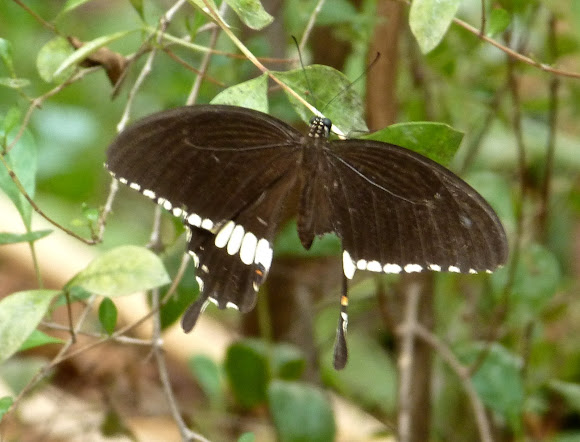 The Common Mormon is one of the "Swallowtail" papilionidae species which can be found in the forests as well as in cultivated urban areas. The female of the species is dimorphic, f. polytes, is a good mimic of the Common Rose. As the Common Mormon is not impalatable to birds, the female mimics the poisonous Common Rose for protection from its predators. Another female form, f. cyrus, which resembles the male but has a rather faint red tornal spot in space 1a on the upperside of the hindwing

These 2 butterflies had been dancing together all afternoon, and just at sunset they settled down to rest. The female had been "in the wars", as her right-side wing tail was completely missing. Pic 1 is the female, Pic 2 is the male, pic 3 shows them both.

Thanks Viv and Satyen for the ID...

Oops! Sorry, I did not realise a suggestion was already given. Deleted.