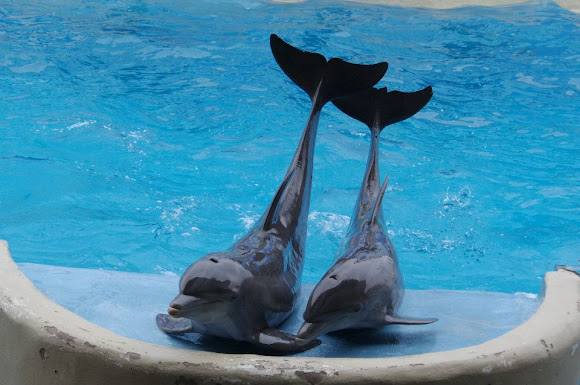 Bottlenose dolphins live in groups typically of 10-30 members, called pods, but group size varies from single individuals up to more than 1,000. Their diet consists mainly of forage fish. Dolphins often work as a team to harvest fish schools, but they also hunt individually. Dolphins search for prey primarily using echolocation, which is similar to sonar. They emit clicking sounds and listen for the return echo to determine the location and shape of nearby items, including potential prey. Bottlenose dolphins also use sound for communication, including squeaks and whistles emitted from the blowhole and sounds emitted through body language, such as leaping from the water and slapping their tails on the water surface. There have been numerous investigations of bottlenose dolphin intelligence. Research on bottlenose dolphins has examined mimicry, use of artificial language, object categorization and self-recognition. Their considerable intelligence has driven interaction with humans. Bottlenose dolphins are popular from aquarium shows and television programs such as Flipper. They have also been trained by militaries to locate sea mines or detect and mark enemy divers. In some areas, they cooperate with local fishermen by driving fish into their nets and eating the fish that escape. Some encounters with humans are harmful to the dolphins: people hunt them for food, and dolphins are killed inadvertently as a bycatch of tuna fishing.