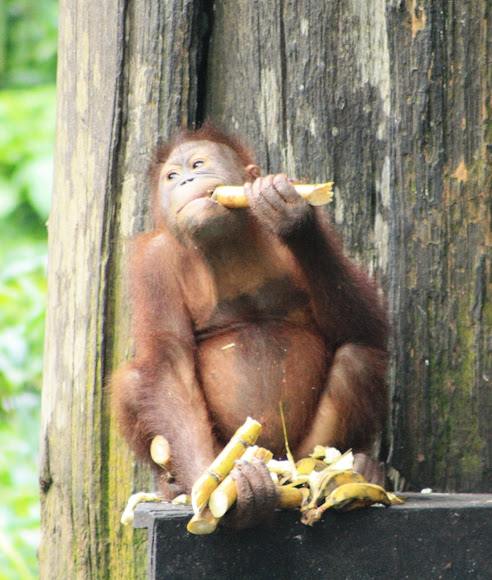 The Bornean orangutan has a distinctive body shape with very long arms that may reach up to two metres in length. It has a coarse, shaggy reddish coat[9] and prehensile, grasping hands and feet.The largest living arboreal animals, they have proportionally longer arms than the other, more terrestrial, great apes. Their hair is typically reddish-brown, instead of the brown or black hair typical of chimpanzees and gorillas. Dominant adult males have distinctive cheek pads. Orangutans are the more solitary of the great apes, with most social bonds occurring between mothers and their dependent offspring.

The Bornean orangutan lives in tropical and subtropical moist broadleaf forests in the Bornean lowlands as well as mountainous areas 1,500 metres (4,900 ft) above sea level. This species lives throughout the canopy of primary and secondary forests and moves large distances to find trees bearing fruit. It can be found in the two Malaysian states of Sabah and Sarawak, and three of the four Indonesian Provinces of Kalimantan. Due to habitat destruction the species distribution is now highly patchy throughout the island, the species has become rare in the south-east of the island, as well as in the forests between the Rejang River in central Sarawak and the Padas River in western Sabah

Spotted at Sepilok Orangutan centre feeding at the feeding platforms on sugar cane and bananas.

Thanks! They certainly are cool!

Orangutans are so cool... Great shots!