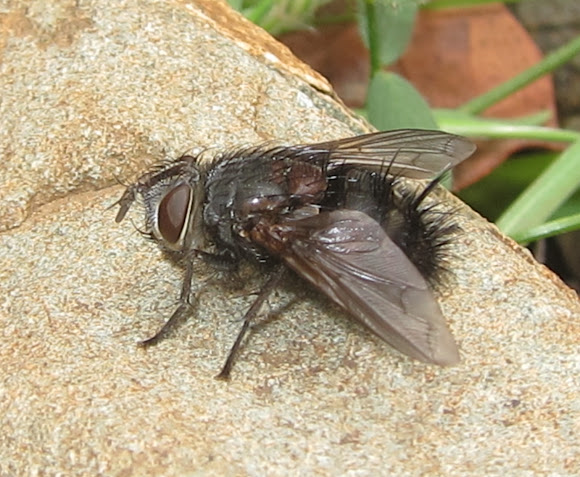 This is another Tachinid Fly I saw in Mount Diablo State Park. Any help with a specific species ID would be great.

Tachinid flies are extremely varied in appearance. Some adult flies may be brilliantly colored and then resemble blow-flies (family Calliphoridae). Most however are rather drab, some resembling house flies. However, Tachinid flies commonly are more bristly and more robust. Also, they usually have a characteristic appearance. They have three-segmented antennae, a diagnostically prominent postscutellum bulging beneath the scutellum (a segment of the mesonotum). They are aristate flies, and the arista usually is bare, though sometimes plumose. The calypters (small flaps above the halteres) are usually very large. Their fourth long vein bends away sharply. Adult flies feed on flowers and nectar from aphids and scale insects. As many species typically feed on pollen, they can be important pollinators of some plants, especially at higher elevations in mountains where bees are relatively few. The taxonomy of this family presents many difficulties. It is largely based on morphological characters of the adult flies, but also on reproductive habits and on the immature stage. Wikipedia