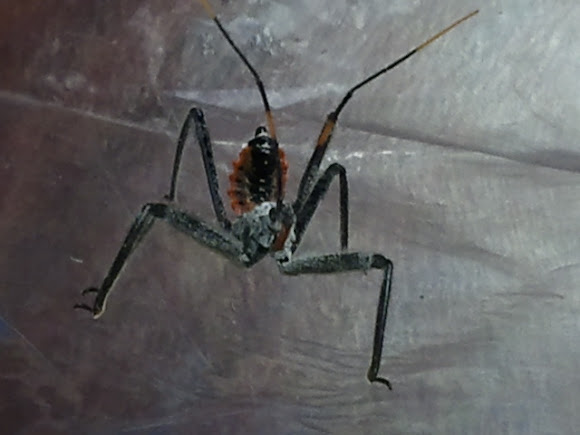 The wheel bug (Arilus cristatus), in the family Reduviidae, is one of the largest terrestrial true bugs in North America, being up to 1.5 inches, or 38 mm, in length. A characteristic structure is the wheel-shaped pronotal armor. They are predators upon soft-bodied insects such as caterpillars, Japanese beetles, etc., which they pierce with their beak to inject salivary fluids that dissolve soft tissue. Because most of their prey are pests, wheel bugs are considered beneficial insects, although they can inflict a painful bite if handled carelessly. Wheel bugs are common in eastern North America, although many people in the region have never seen them. They are camouflaged and very shy, hiding whenever possible. They have membranous wings, allowing for clumsy, noisy flight which can easily be mistaken for the flight of a large grasshopper. The adult is gray to brownish gray in color and black shortly after molting, but the nymphs (which do not yet have the wheel-shaped structure) have bright red or orange abdomens. Contents [hide] 1 Characteristics

Wheel bugs are common in eastern North America, although many people in the region have never seen them. They are camouflaged and very shy, hiding whenever possible. T

The wheel bug has characteristic dorsal armor, shaped like a wheel or cog. It moves and flies slowly, and in flight produces a noisy buzzing sound. It has one of the most developed set of mouth parts among true bugs. Its beak arises from the anterior end of its long, tubular head and unfolds forward. The bug plunges its beak into its victim, pinning its prey with its front legs. It then injects enzymes into the victim, paralyzing it and dissolving its insides, and proceeds to drain all of the victim's bodily fluids. The bite of a wheel bug is painful and may take months to heal (sometimes leaving a small scar), so caution is highly advised when handling them. The wheel bug is also noted to be very vicious in the wild, and cannibalistic behaviors between them have been noted; for example, nymphs may prey on nymphs and the female may feed on the male after mating is concluded. It possesses two scent sacs (red-orange in color) that can be fired from its anus, usually in reaction to being disturbed. The scent produced by it is not as powerful as that produced by the stink bug, but is still strong enough to be detected by human noses. Colors include black and gray. [edit] Reproduction

Yeah these things are nasty. They inflict a painful bite but there is no worry of death or disfigurement from it. They like to hang around water and I have dealt with some children being bitten by them when I would lifeguard at my municipal pool in the summer.

ok he bite a child in my class, I did set this creature free

This is the nymph stage of the Wheel Bug.