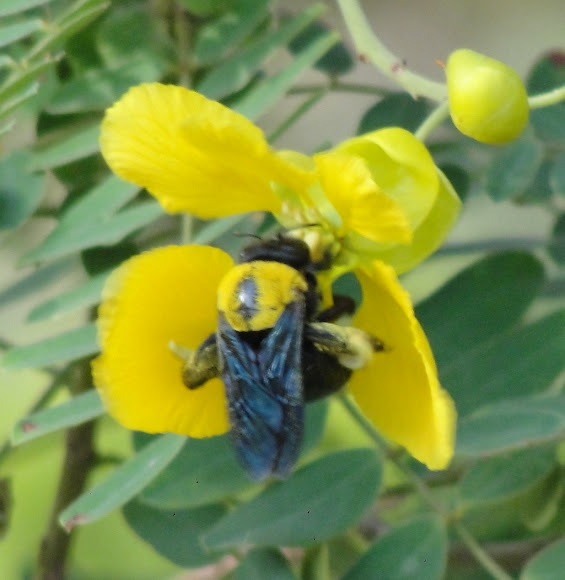 The most visible physical difference (at a glance) between this species and a bumblebee is the abdomen. Eastern carpenter bees have a shiny black abdomen, with the only yellow hair present being at the base next to the thorax, while bumblebees have a very fuzzy abdomen, which in some species has large areas of yellow hair across the middle (this is visible and obvious). The female eastern carpenter bee also has a much broader head than bumblebees. Eastern carpenter bees can be sexed at a glance. Males have a patch of white or yellow cuticle on the face, as opposed to females, whose faces are black. Males are unable to sting, since a bee's stinger is a modified ovipositor (an egg laying organ).

Carpenter bees are not solitary bees, but are not truly social either. The weak form of sociality they exhibit, with one female doing the majority of the work, and caring for her sisters, may be a transitional step in the evolution of sociality. However they tend to be gregarious, and often several will nest near each other. Male eastern carpenter bees are curious and will investigate anyone, including humans, that comes near their nests. The curiosity is often interpreted as aggressiveness; however, the males are only aggressive to other male carpenter bees. They do not have stingers and cannot cause any real harm. The female carpenter bees tend to be busy with floral visitation and nest provisioning, but have the ability to cause a painful sting if captured. Males spend many hours guarding their territory against other males, hovering about the nests for hours on sunny days. They sometimes attempt to mate with other insects or small birds.

Carpenter bees are strong fliers, capable of returning to their nests from some miles away, but not very agile. They tend to be clumsy, frequently almost crashing into the side of a wall or various trees and plants. On occasions, the bees will fly into old windows made of acrylic glass, as UV light can pass through it and the bee sees it as open. Carpenter bees are not aggressive. Often, a carpenter bee preoccupied with something will not sting or flee when approached closely or even touched by a human, but merely raise one or two of its legs in the air instead.

Nice to see them

@ Julio here is yellow one,