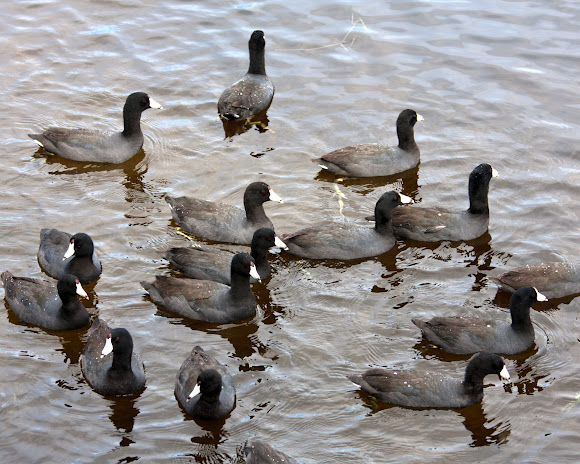 American Coot (Fulica americana) - a raft of 14 gathered - at Green Cay Wetlands, Boynton Beach, Florida. These shots are a self-imposed challenge: to see how many of one species I can capture in a (standard-size cropped) image. (Only recognizable whole animals count, standard image format i.e. 4x6, 5x7, 8x10, high density i.e. minimal fore/background.) << Measuring 34–43 cm (13–17 in) in length and 58–71 cm (23–28 in) across the wings, adults have a short thick white bill and white frontal shield, which usually has a reddish-brown spot near the top of the bill between the eyes. ... Outside the breeding season, particularly in winter, they gather together in sometimes huge groups for protection and socializing. Groups of coots are called covers or rafts. >>

The American Coot (Fulica americana) is a bird of the family Rallidae, inhabiting wetlands and open water bodies. Measuring 34–43 cm (13–17 in) in length and 58–71 cm (23–28 in) across the wings, adults have a short thick white bill and white frontal shield, which usually has a reddish-brown spot near the top of the bill between the eyes. Body mass in females ranges from 427 to 628 g (0.94 to 1.38 lb) and in males from 576 to 848 g (1.27 to 1.87 lb). From up close, a dark band can be distinguished at the billtip. The body is grey with the head and neck darker than the rest of the body. Their legs are yellowish, with lobed toes rather than webbed feet. Their chicks have black bodies with bright red head and beak, and orange plumes around the neck. The call is a high-pitched squeaking honk somewhat like a goose's but more hollow sounding. Their breeding habitat is marshes from southern Quebec to the Pacific coast of North America and as far south as northern South America. Birds from temperate North America east of the Rocky Mountains migrate to the southern United States and southern British Columbia. They are often year-round residents where water remains open in winter. It is notable that in Ohio, birds apparently move to their breeding range about half a month earlier and leave for winter quarters the same time later than they did 100 years ago. Also, the number of birds that stay year-round near the northern limit of the species' range seems to be increasing. Although coots seem rather weak fliers, like most rails they have considerable stamina once airborne. This species has crossed the Atlantic to reach western Europe at least 23 times since records began, including 12 records in the Azores and four in Great Britain. In December 2003, an individual of this species attempted to overwinter in the Shetland Islands, Scotland. Two sightings have been found as well in Tasmania on October 2008. These birds require a great deal of effort to become airborne, pedaling across the water with their feet before lifting off. The way in which their heads bob when they walk or swim has earned them the name "marsh hen"or "mud hen". These birds are frequently seen swimming in open water. They can dive for food but can also forage on land. American Coots are omnivorous, eating plant material, arthropods, fish, and other aquatic animals. They nest in a well-concealed location in tall reeds. American Coots are highly territorial during the breeding season, with both males and females fighting with neighbors to maintain a small territory where they obtain all their food. The females are known to lay eggs in neighbors' nests (conspecific brood parasitism); contrary to what one might expect, this behavior is more common among females that already have a nest than among those that were not able to secure a suitable territory for breeding in that season. Coots are fairly aggressive in defense of their eggs and, in combination with their protected nesting habitat, this undoubtedly help reduce losses of eggs and young to all but most determined and effective predators. American crows, black-billed magpies and forster's tern can sometime take eggs. Mammalian predators (including red foxes, coyotes, skunks and raccoons) are able to predate coot nests even more rarely, though nests are regularly destroyed in usurpation by muskrats. Conversely, the bold behavior of immature and adult coots leads to them falling prey with relative regularity once out of the breeding season. Regular, non-nesting-season predators include great horned owls, northern harriers, bald eagles, golden eagles, american alligators, bobcats, great black-backed and california gulls. In fact, coots may locally comprise more than 80% of the diet of bald eagles. Outside the breeding season, particularly in winter, they gather together in sometimes huge groups for protection and socializing. Groups of coots are called covers or rafts. (credit: http://en.wikipedia.org/wiki/American_Co......)

jansonjones,
Thanks...!
My favorite Coot behavior is when they string out in a long train - and then they all decide to "run" to catch up to the leaders...
(btw, I used to reply to every comment by return email until recently learning that it does not work that way. Apologies for delayed acknowledgements and replies.)