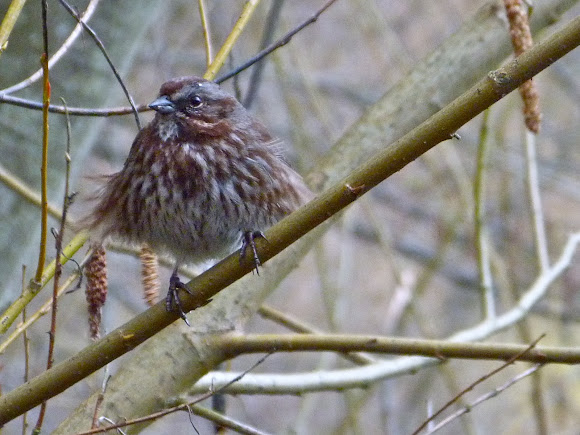 Adults have brown upperparts with dark streaks on the back and are white underneath with dark streaking and a dark brown spot in the middle of the breast. They have a brown cap and a long brown rounded tail. Their face is grey with a streak through the eye. In the field, they are most easily confused with its congener the Lincoln's Sparrow, and the Savannah Sparrow. The former can be recognized by its shorter, greyer tail and the differently-patterned head, the brown cheeks forming a clear-cut angular patch. The Savannah Sparrow has a forked tail and yellowish flecks on the face when seen up close. Although they are a habitat generalist, their favorite habitat is brushy areas and marshes, including salt marshes, across most of Canada and the United States. They also thrive in human areas, such as in suburbs, along edges in agricultural areas, and along roadsides. In southern locations, they are permanent residents. Northern birds migrate to the southern United States or Mexico, where there is also a local population resident all year round. These birds forage on the ground, in shrubs or in very shallow water. They mainly eat insects and seeds. Birds in salt marshes may also eat small crustaceans. They nest either in a sheltered location on the ground or in trees or shrubs.

Thanks Ava - I think you are right!
Thanks for your comment Jack!

I think it's a song sparrow.