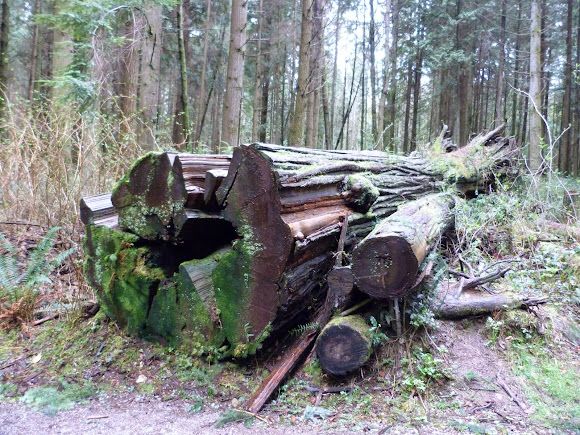 When this Western red cedar fell victim to a windstorm in 2006 it was over 600 years old. This means it was a seedling when settlers first set foot on North America's Eastern shores. As a mature tree, it weighed 36 tonnes & stored enough water to fill 100 bathtubs, which helped it survive summer droughts. Western red cedars produce a natural fungicide called thujaplicin which gives cedars their famous aroma & helps to wood resist decay. This cedar log will take several centuries to rot away - it will be home to many generations of wildlife & provide a rich nutrient base on which young trees & plants can root & grow. Almost all young evergreens in rainforests grow on decaying logs & stumps, so slowly rotting cedars play a key role in supporting forest regeneration. Text copied from information sign by the log.

Forest in Stanley Park, Vancouver, BC.

It was too good a story not to share! :)

Thank you harsuame!
Meik, it would be good to document that! At the moment it seems to be mainly mosses & ferns but we saw many other stumps (from logging activity over 100 years ago before the area was protected) that had young cedar trees & many other plants growing from them. The center of this was completely hollow so I suspect it is already home to quite a few species of insect & other critters!

Great habitat for many other organisms! Would be nice to document its stepwise colonization by other species.

Thank you for this nice description!

Thanks Cindy! I took a photo of the sign so I could share the info because for me it really described the whole process of decay & regeneration.

Wonderful description! Sad when these beauties fall but at least it wasn't cut down!