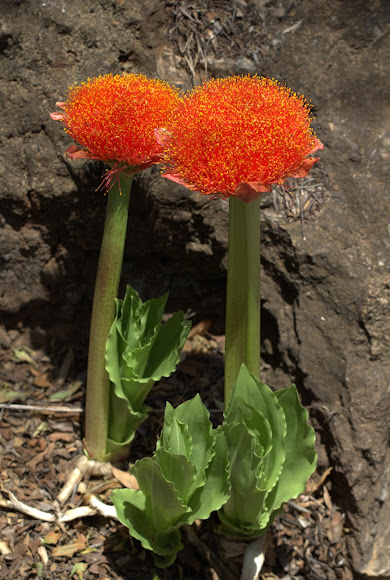 Seen while visiting the Sterkfontein Caves at the Cradle of Humankind (South Africa) Haemanthus is a small genus of bulbs endemic to southern Africa. Individual species may be evergreen, summer-growing or winter-growing. The flower consists of numerous florets held in a spherical or flattened umbel often surrounded by fleshy spathes, with the flower appearing before the leaves develop.

Haemanthus is found from Namibia through Namaqualand to the Western Cape and then through the Southern Cape to the Eastern Cape as far north as KwaZulu-Natal and the Transvaal. Haemanthus species are extremely variable in their habitat requirements - from coastal dunes to mountain tops, rocky ledges to seasonally-inundated gravel plains and bogs. Some species, such as H. canaliculatus, are to some extent fire-dependent in that they need occasional burning of their fynbos habitat to clear undergrowth in order to flower.

What a beautiful and unusual looking plant. Great spotting, Johan.