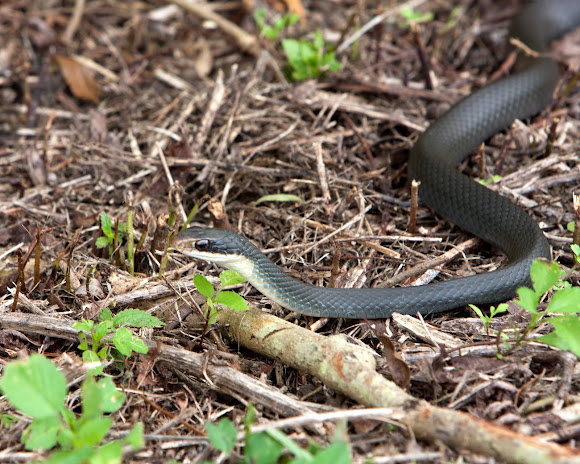 Everglades Racer (Coluber constrictor paludicola), a subspecies of the Southern Black Racer (Coluber constrictor priapus) - a pair, each about 4 feet long, spotted at Anhinga Trail, Everglades National Park, Florida. << Average adult size is 20-56 inches (50-142 cm). Adult color typically is slate gray, but many specimens are brownish-gray, bluish, or greenish. The chin and throat are white. The belly is grayish to uniform black. The body is slender and the scales are smooth, and there are 17 dorsal scale rows at midbody. The pupil is round. Juvenile color is gray with distinct reddish brown blotches fading into a solid-colored tail. In Florida, it is found in the Everglades region and throughout the southern peninsula and northern Florida Keys. It is also found near Cape Canaveral in Brevard Co., FL. It is not found outside of Florida. Commonly found in pinelands, hardwood hammocks, prairies, cypress strands, melaleuca forests, and limestone outcroppings. >> (credit: http://www.flmnh.ufl.edu/herpetology/fl-...)

The Southern Black Racer (Coluber constrictor priapus) is one of the more common subspecies of nonvenomous snakes in the Southeastern United States. The name priapus refers to the proximal spines of the hemipenes being much enlarged into basal hooks, which is characteristic of this subspecies. These snakes are quite active during the day, which increases the chance of sightings. They will eat almost any animal they can overpower, including, rodents, frogs, toads, and lizards. They have been known to charge at people in an attempt to frighten them, but will usually retreat – if challenged. Members of this species generally do not tolerate handling – even after months in captivity – and will typically strike and flail wildly every time they are handled. These snakes are usually thin with a jet black dorsal side with a grey belly and white chin. They are quite fast, giving rise to the name "racer". The Southern Black Racer is an excellent swimmer and climber, and is aptly named because it has incredible speed and is very difficult to capture. When cornered it will fight—its tiny sharp teeth can deliver a painful but nonvenomous bite. Escape is its best defense, but the animal has been known to occasionally turn and pursue humans or other potentially threatening animals that have ceased their own pursuits. Like many other species, the Black Racer will vibrate its tail in dry leaves and grass and the resulting sound is reminiscent of the noise made by a Rattlesnake. The snake favors wooded areas, brush and thickets although it is also commonly seen in suburban yards. While hunting it can travel at good speed even with its head elevated well off the ground. The Southern Black Racer is a predator that relies on lizards, insects, moles, birds, eggs, small snakes, rodents, and frogs. Despite its specific name constrictor (scientific name: Coluber constrictor), the Racer is more likely to suffocate or crush its victim into the ground rather than coiling around it in typical constrictor fashion. Man remains the biggest enemy of Black Racers. Many are killed on highways and others are intentionally killed out of fear. The white chin causes many people to kill this snake, believing that it is a Cottonmouth—a venomous snake more commonly called a Water Moccasin. The venomous snake has a white lining inside of its mouth. Racers are nonvenomous and do not breed with Cottonmouths. Natural enemies include such birds of prey as hawks including the Red-shouldered Hawk and Broad-winged Hawk. These perching and soaring birds have keen eyesight and drop down from above to capture Black Racers and other snakes thus making their speed and ground awareness ineffectual. It is believed snakes are color blind. Adult Racers are solid black, but juveniles are blotched gray and reddish brown. Adult racers are 24–55 inches (0.6 - 1.4 m) long and rarely exceed 70 inches (1.8 m). Breeding and egg laying occur between March and August. Up to 20 eggs are laid, but as in most reptiles, no interest is taken in hatching or rearing the young. Newly hatched Racers are about 6 inches (15 cm) long and rely on their juvenile camouflage for survival. Like other snakes, the Racer will shed its skin several times a year. (credit:http://en.wikipedia.org/wiki/Coluber_constrictor_priapus)

blaise,
Thank you! Glad you liked the shots...