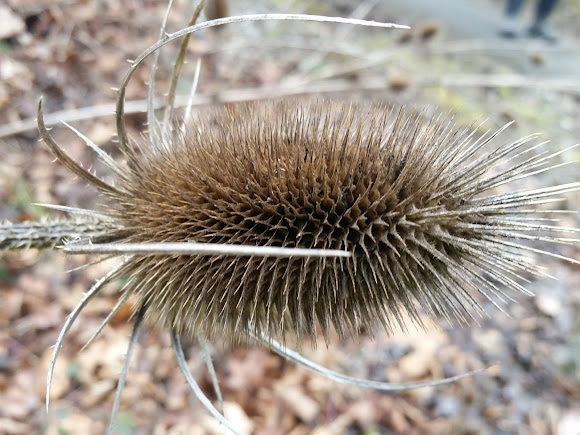 Dipsacus is a genus of flowering plant in the family Caprifoliaceae.[1] The members of this genus are known as teasel, teazel or teazle. The genus includes about 15 species of tall herbaceous biennial plants (rarely short-lived perennial plants) growing to 1–2.5 metres (3.3–8.2 ft) tall. Dipsacus are native to Europe, Asia and northern Africa. The genus name is derived from the word for thirst of water and refers to the cup-like formation made where sessile leaves merge at the stem. Rain water can collect in this receptacle; this may perform the function of preventing sap-sucking insects such as aphids from climbing the stem. A 2011 experiment has shown that adding dead insects to these cups increases the seedset of teasels (but not their height), implying partial carnivory.[2] Carnivory in teasels was discussed by Francis Darwin (son of Charles Darwin) in a paper held by The Royal Society.[3] The leaf shape is lanceolate, 20–40 centimetres (7.9–15.7 in) long and 3–6 centimetres (1.2–2.4 in) broad, with a row of small spines on the underside of the midrib. Teasels are easily identified with their prickly stem and leaves, and the inflorescence of purple, dark pink or lavender flowers that form a head on the end of the stem(s). The inflorescence is ovoid, 4–10 centimetres (1.6–3.9 in) long and 3–5 centimetres (1.2–2.0 in) broad, with a basal whorl of spiny bracts. The first flowers begin opening in a belt around the middle of the spherical or oval flowerhead, and then open sequentially toward the top and bottom, forming two narrow belts as the flowering progresses. The dried head persists afterwards, with the small (4–6 millimetres (0.16–0.24 in)) seeds maturing in mid autumn. The seeds are an important winter food resource for some birds, notably the European goldfinch. Teasels are often grown in gardens and encouraged on some nature reserves to attract them.[4] Teasel is also considered an invasive species in the United States. It is known to form a monoculture, capable of crowding out all native plant species, and therefore is discouraged and/or eliminated within restored open lands and other conservation areas.