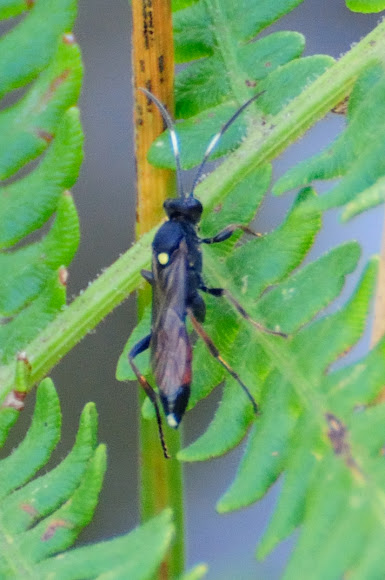 Ichneumon wasp. Slender, wasplike. Antennae with 16 or more segments and usually at least half as long as body. They vary greatly in size and color; many are uniformly colored, from yellowish to black and others are brightly patterned with black and brown or black and yellow; many have middle segments of antennae yellowish or whitish. The majority resemble slender wasps but differ from the stinging wasps (Scolioidea, Vespoidea and Sphecoidea) in having longer antennae with more segments (usually at least 16). Many female ichneumon wasps have long ovipositors, often longer than the body. Ichneumons generally inject venom along with the egg, but only larger species, with relatively shorter ovipositors, use the ovipositor as a stinger in defense. Some species of ichneumon wasps lay their eggs in the ground, but most inject them directly into a host's body, typically into a larva or pupa. Ichneumonids are notoriously hard to identify: aside from the sheer number of species, there are numerous cases of distant relatives that appear almost identical.

Thanks for your ID suggestion, stho002. I agree with you that it is an Ichneumon wasp