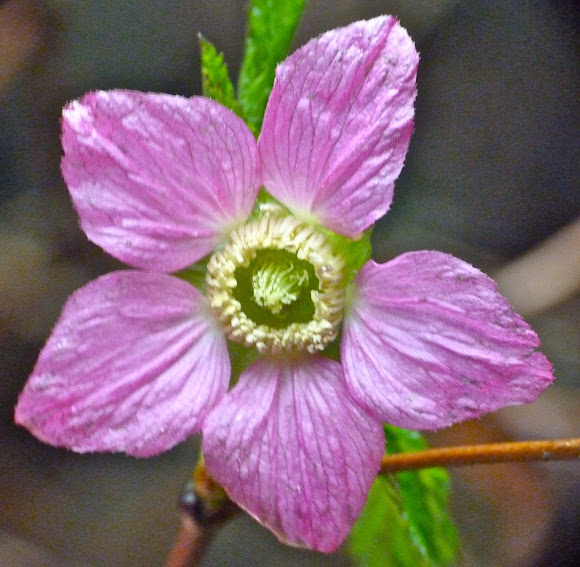 Tall open shrub with 1" diameter papery pink blooms. Rubus is a large genus of flowering plants in the rose family, Rosaceae, subfamily Rosoideae. Raspberries, blackberries, and dewberries are common, widely distributed members of the genus. Most of these plants have woody stems with prickles like roses; spines, bristles, and gland-tipped hairs are also common in the genus. The Rubus fruit, sometimes called a bramble fruit, is an aggregate of drupelets. The blackberries, as well as various other Rubus species with mounding or rambling growth habits, are often called brambles. However, this name is not used for those like the raspberry that grow as upright canes, or for trailing or prostrate species such as most dewberries, or various low-growing boreal, arctic, or alpine species. The generic name means blackberry in Latin and was derived from the word ruber, meaning "red". The genus Rubus is believed to have existed since at least 23.7 to 36.6 million years ago. The scientific study of brambles is known as "batology".

Welcome KarenL : ) There is a very pretty form - Rubus cockburnianus 'Goldenvale' that I had in England. The stems had a beautiful grey/white bloom on them through the winter, which looked fabulous

Thanks Cindy! I've joined the mission!

Hi Karen, it looks like you're having a good time in the Pac NW! There's a Pacific Northwest Bioregion mission you can add your spottings to at http://www.projectnoah.org/missions/8194...