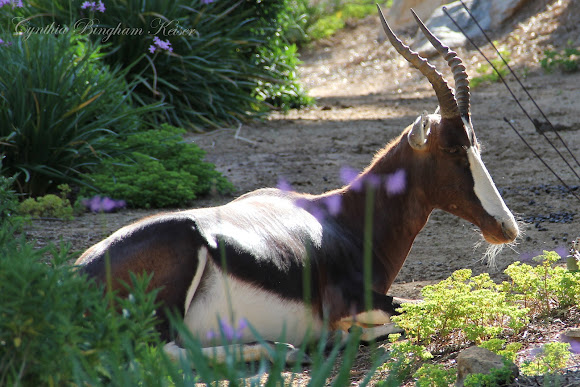 "The Bontebok stands 80 to 100 cm at the shoulder and weighs 50 to 90 kg. The Bontebok is a chocolate brown colour, with a white underside and a white stripe from the forehead to the tip of the nose, although there is a brown stripe across the white near the eyes in most Blesbok. Bontebok also has a distinctive white patch around its tail (whence the Latin name), while this patch is light brown/tan in Blesbok. The horns of Bontebok are lyre-shaped and clearly ringed. They are found in both sexes and can reach a length of half a metre." - Wikipedia

San Diego Zoo Safari Park. They're in South Africa and Lesotho. "Bontebok are restricted to coastal Fynbos and Renosterveld." - Wikipedia

"Bontebok are not good jumpers but they are very good at crawling under things. Mature males form territories and face down other males in displays and occasionally combat." - Wikipedia