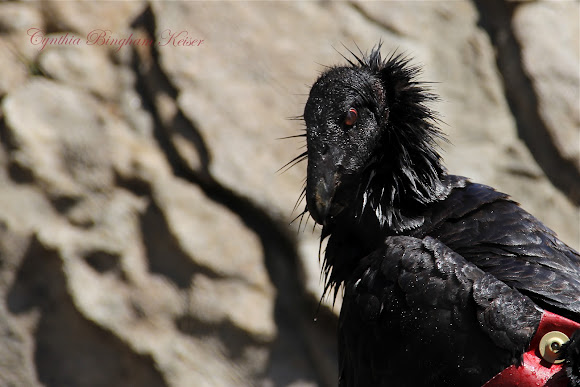 This youngster is named Nimey and was born in 2009. "The plumage is black with patches of white on the underside of the wings and the head is largely bald, with skin color ranging from gray on young birds to yellow and bright orange on breeding adults. Its almost 3.0 meter wingspan is the largest of any North American bird, and its weight of up to 26 lbs. makes it the heaviest bird native to North America. Only the Trumpeter Swan has a comparable weight among native North American birds. It is one of the world's longest-living birds, with a lifespan of up to 60 years." - Wikipedia The adult CA Condor can be seen at: http://www.projectnoah.org/spottings/102...

"Condor numbers dramatically declined in the 20th century due to poaching, lead poisoning, and habitat destruction. A conservation plan was put in place by the United States government that led to the capture of all 22 remaining wild condors in 1987. These surviving birds were bred at the San Diego Zoo Safari Park and the Los Angeles Zoo. Numbers rose through captive breeding and, beginning in 1991, condors have been reintroduced into the wild. The project is the most expensive species conservation project ever undertaken in the United States. The California Condor is one of the world's rarest bird species: as of December 2011, there are 390 condors known to be living, including 210 in the wild." - Wikipedia

He looks so black and shiny...almost like he's covered in oil! And the eye!! Love it! Nice pics!

This bird was truly magnificent. I didn't expect that from a Condor for some reason. Its funny that the adults (my other spotting) were fighting while this young one was keeping a distance and just talked back :)