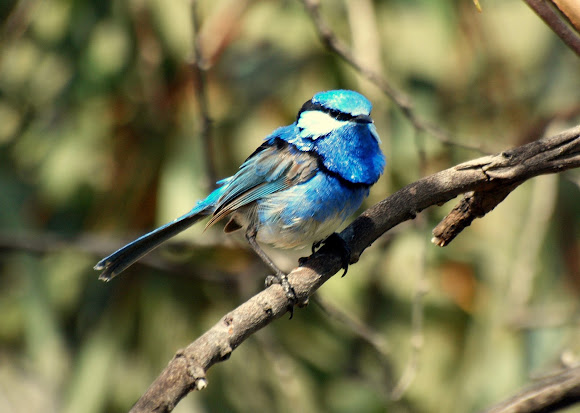 The breeding plumage of the male is predominantly blue, varying from cobalt-blue in the east of its range to violet-blue in the west.It has black bands at the base of the tail (absent in the violet-blue birds), across the breast and from the beak, through the eyes to join a band across the back of its neck. Its crown and cheek patches are paler blue. Wings and long tail are brown with a blue wash. His beak is black and his legs and feet are brown-grey. In non-breeding plumage, called eclipse, he is very similar to the female, being pale brown above and buff to white underneath although he retains the blue wash on wings and tail. The female does not have the blue wash on her wings, but does have a reddish-tan line from beak to eye that extends into a ring around her eye. Her beak is reddish-tan.

These birds live in arid to semi-arid areas, in mostly dense shrublands or woodlands of acacia, and mallee eucalypt with dense shrubs.

What a beautiful bird, the colours are awesome!