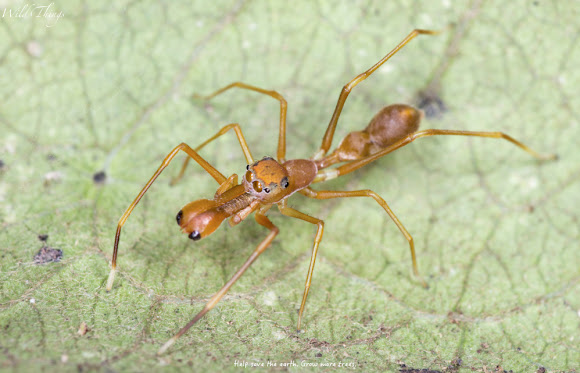 1st pic is of a male and the second one shows the female below a thin layer of web. Myrmarachne plataleoides, also called the Kerengga Ant-like Jumper, is a jumping spider that mimics the Kerengga or weaver ant (Oecophylla smaragdina) in morphology and behaviour. Myrmarachne plataleoides, especially the females, mimic the Weaver Ants in size, shape and colour. The body of the Myrmarachne plataleoides appears like an ant, which has three body segments and six legs. This creates the illusion of having a distinct head, thorax and gaster of the weaver ant, complete with a long and slender waist. The large compound eyes of the weaver ant are mimicked by two black patches on the head. The males resemble a larger ant carrying a smaller one. The scientific name of the genus literally translates as "ant spider".

Seen at an open forest near a river.