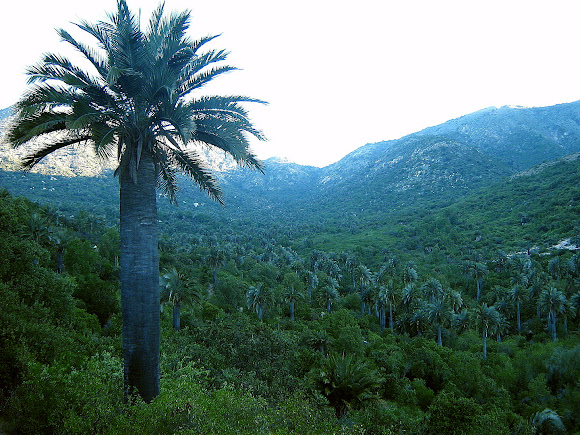 Jubaea chilensis (Molina) Baill. (Chilean Palm) is the only living species of the genus (monotypic) Jubaea, which is included in the family Arecaceae. The Chilean palm is a palm very impressive, the most corpulent of them, reaching heights of 25 m with a thick trunk up to 1.3 m in diameter at the base, usually narrower upwards, and smooth bark. It is very slow growing, blooming before 60 years of age. The leaves are feather-shaped, 3 to 5 m longinto slow, so slow that the germination of the seed alone can take months to reach reproductive age at 60 years. You need mild winters, but can tolerate cold down to -15 ° C, making it one of the most resistant of the palm leaf-shaped pen can also tolerate relatively cool summers. Today it is found in the wild in hills near the coast, and around Valparaiso, highlighting in the palm of Ocoa (70,000) in the La Campana National Park and the Cocalán (35,000 copies), Region Valparaiso.

A native of southwestern South America, where it is endemic to a small area of ​​central Chile between 32 ° S and 35 ° S in the south of the Region of Coquimbo, Valparaíso Region, which is more abundant, Metropolitan Region Santiago, O'Higgins Region and Northern Region Maule, whose climate is Mediterranean with long dry season.

This is in carretera las palmas is natural park of valparaiso

Very nice :)
I was in Valparaíso 12 years ago, unfortunately I didn't see much of the nature...