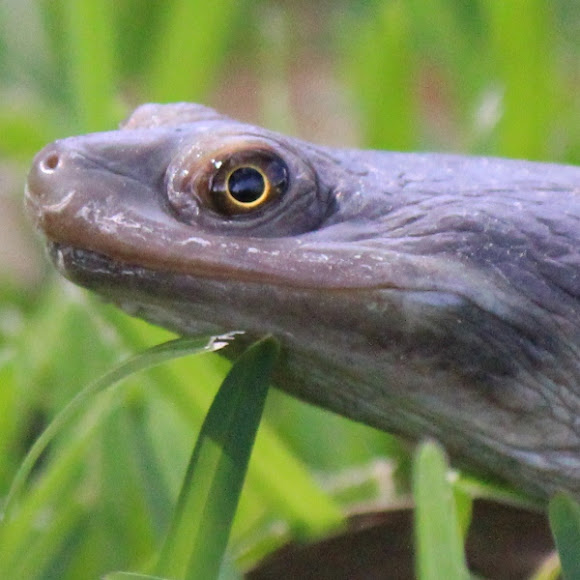 Also known as the eastern snake-necked turtle, common snake-necked turtle or common long-necked turtle. It bends its head sideways into its shell rather than pulling it directly back. When it feels threatened, this turtle will emit an offensive smelling fluid from its musk glands. This trait gives the turtle one of its other common names, "stinker." (This particular specimen DOES stink!)

These turtles are found in the inland slow-moving freshwater habitats such as swamps, dams, and lakes of Australia, from northern Queensland to South Australia. They prefer a soft, sandy bottom and will bask on logs or rocks during the day.

This lovely turtle, nicknamed Sheldon, has come into our care after being treated for serious shell fractures at our local Wildlife Hospital. He will be with us for some time while he heals, and will eventually be released back into the wild. I'm not sure how the fractures were caused as we haven't spoken directly to the vet yet but she has done an amazing job of putting him back together - shot 3 shows a bracket on the upper shell fracture, and shot 4 shows the serious hardware she's used to pin the lower shell together. We have to keep Sheldon 'dry-docked' so the fractures can heal, but Eastern Long-necked Turtles can only feed in water so we have to 'swim' him every second day for feeding, then dry him off carefully and apply antiseptic to the wounds. Despite all his troubles he has a lovely nature. It is a privilege to care for him. 21/4/12 - Two new pics added - one of Sheldon walking in the grass and another of him peeking out from under his shell. We took him to the vet today and his shell has healed enough to have all his hardware removed. He no longer needs to be dry-docked and has been moved into a watery tank. As long as there is no movement in the shell fractures he should be right for release in about a month (after his next checkup). 6/5/12 - Released into the wild near Beerwah. : )

A beautiful spotting, Shanna. I love the story of Sheldon's rescue. Here's hoping he's living a long and happy life. Thanks for rescuing and sharing :)

We released this guy back into the wild yesterday! : )

Pics and notes updated. @Emma - I forgot to ask about the snail!!!!!

Emma, next time we take Sheldon in for a check-up I will ask. : )

Shanna ,can you ask one of the vets about the snail?

It is wonderful you are giving it such care. And that is an amazing long neck!

Emma - I honestly don't know re the snail, I think it would be unlikely (but some of these vets are just amazing)!! Cindy and Oleg - Thanks. : )

What would you do if somebodies snail fractures its shell? Would yo be able to help it? Just a little curious!