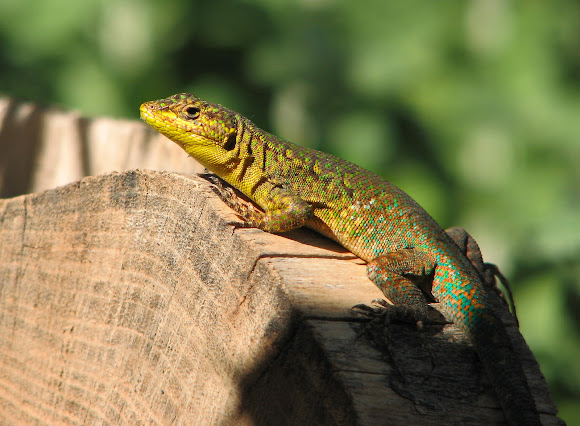 Liolaemus tenuis, known as Jewel Lizard is a species of lizard in the Iguanidae family. Other names are Slender Lizard and Thin Lizard. It is endemic to Chile.The males have a striking yellow-green in the front and blue on the back, however, females are generally gray in color with green and blue points distributed through your body, chin and neck is less intense yellow in the male. Measuring about 14 cm (about 12 cm females). Are Insectivorous.

Tend to live in bushes and vegetation, but each pair was "possession" of a tall tree on the climb and defend from other individuals of their species, the male is downright territorial. In Chile lives from the Region of Coquimbo Region of the Ríos1. Of the Chilean reptiles, the green lizard is one of the two species can also find in urban areas where man has totally changed the environment around you. It is therefore common to see them move in ornamental tree trunks or in the walls that separate urban properties, which typically are easy prey for cats. Territorial behavior in natural environments, it is the males that protect your exclusive area it is possible to observe more closely. Quickly react to the presence of a male intruder who could steal the favors of the female under his "protection"