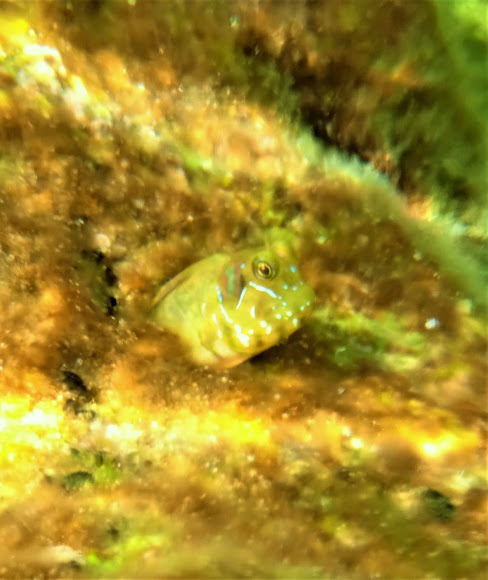 Locally named (if named at all) Slingurica kokošica, this is a very small blenny, not more than 8cm in length. The body is unremarkable, brownish, and flanks sports 5 to 7 broad brown stripes. On the contrary, the head is spectacularly beautiful - adorned with fluorescent blue stripes and dots, and a large blue spot rimmed in red. On top, two small horn-like sensory organs. My pics don't do credit to its beauty, but you can see a spectacular pic of this blenny here: http://dalibor-andres.from.hr/uw/jr_055.... ; and few more in a french-language reference, provided aside.

I don't know how common this blenny is in Adriatic sea, as these small fishes are rarely noted and it's hard to find the info - my fisherman friends would probably describe it as 'small jobs with no interest'. However, it is common in Mediterranean, in very shallow waters, on rocks, but very near the surface. Here, photographed in two different spots of Bay of Cavtat (Dubrovnik riviera), one on a popular beach of Cavtat, another on a more secluded one (very 'local' one) in village of Plat. The both zones are roughly similar - rocks reaching the surface, providing many hiding places, slopping down to 10m gradually. The sea bottom here is rocky, creating many crevasses and tunnels, and rocks are abundantly covered in algae. In those deeper waters, there are some large colonies of sea grass settled on patches of sand.