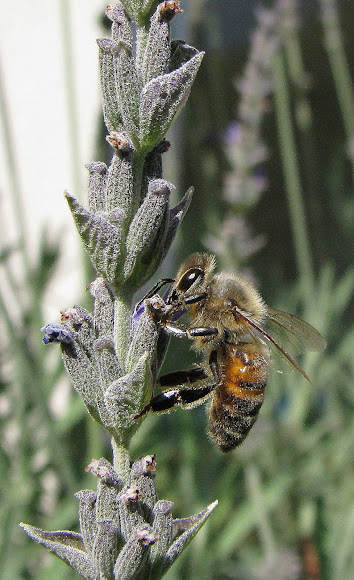 The genus Apis is Latin for "bee", and mellifera comes from Latin melli- "honey" and ferre "to bear"—hence the scientific name means "honey-bearing bee". The name was coined in 1758 by Carolus Linnaeus who, upon realizing the bees do not bear honey, but nectar, tried later to correct it to Apis mellifica ("honey-making bee") in a subsequent publication. However, according to the rules of synonymy in zoological nomenclature, the older name has precedence. As of October 28, 2006, the Honey Bee Genome Sequencing Consortium fully sequenced and analyzed the genome of Apis mellifera.

he western honey bee is native to the continents of Europe, Asia, and Africa. As of the early 1600s, the insect was introduced to North America, with subsequent introductions of other European subspecies two centuries later.[1] Since then, they have spread throughout the Americas. Western honey bees differentiated into geographic races as they spread from Africa into Eurasia.[2] Currently, 28 subspecies based on these geographic variations are recognized.[citation needed] All races are cross-fertile, though reproductive adaptations may make crossing unlikely. The 28 subspecies can be assigned to one of four major branches based on work by Ruttner, and subsequently confirmed by analysis of mitochondrial DNA. African subspecies are assigned to branch A, northwest European subspecies to branch M, southwest European subspecies to branch C, and Mideast subspecies to branch O. The subspecies are grouped and listed in the sidebar. Regions with localized variations may become identified subspecies in the near future, such as A. m. pomonella from the Tian Shan Mountains, which would be included in the Mideast subspecies branch. Geographic isolation led to numerous adaptations as honey bees spread after the last ice age. These adaptations include brood cycles synchronized with the bloom period of local flora, forming a winter cluster in colder climates, migratory swarming in Africa, enhanced foraging behavior in desert areas, and numerous other inherited traits.