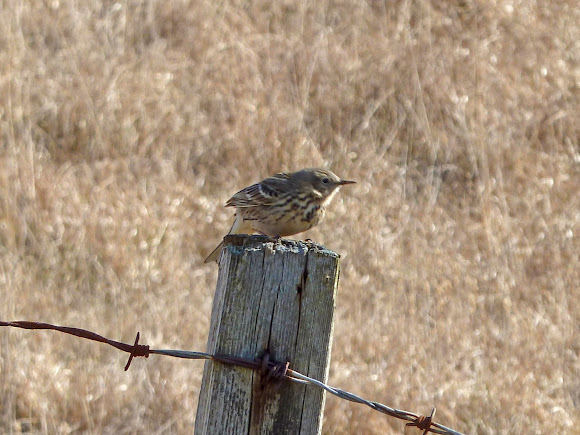 A small, brown, streaky bird, it is the commonest songbird in upland areas and its high, piping call is a familiar sound. In flight it shows white outer tail feathers and in the breeding season it has a fluttering 'parachute' display flight. In winter they are quite gregarious and gather in small flocks, often invisible among the vegetation, suddenly flying up with typical jerky flight.

This spotting was made amongst grassy-moorland near a stream. I've seen them many times here, but they don't seem to stray very far from this spot. They seem to have a nest about 10 to 15m from the roadside.

Meadow pipit numbers in the UK have been declining since the mid-1970s, resulting in this species being included on the amber list of conservation concern.

No problem, will do.

Hi Colin, may I please ask you to add in the habitat field the habitat in which you actually saw the spotting. This will help us to track changes of habitat which are occurring with many species as they try to adapt to human interference.

Thanks! They are quite frustrating little things to photograph - they love hiding in the long grass that you can see in the background.

Thanks again, Liam - I'm just going to start emailing you my pictures directly to save time :)