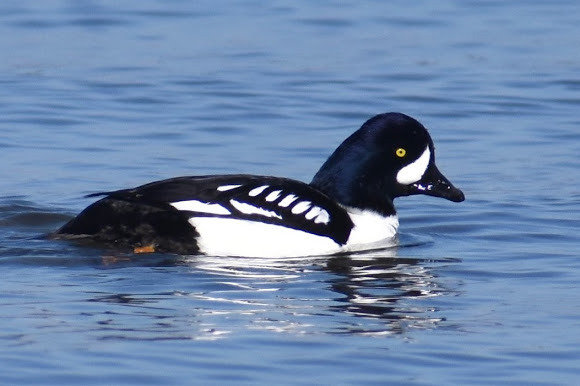 Male Barrow's Goldeneyes have iridescent purple heads and crescent-shaped white spots on each side of the head at the base of the bill. Their bellies and flanks are white, and their rumps are black. Their backs are mostly black with white spots. Their bills are solid black. Females have a brown head, grey body and a mostly orange bill seen in pic 3.

Spotted in Puget Sound at Dash Point State Park. Barrow's goldeneye is migratory and winter in coastal areas. They are common in Puget Sound, especially at the southern end of the sound, and in coastal bays and estuaries.

In the breeding season, aquatic insects make up the bulk of the diet, and in fact, Barrow's Goldeneyes prefer ponds that lack insect-eating fish that compete for prey. In winter, mollusks, crustaceans, fish, and occasionally fish eggs are their main foods.

Thanks for commenting Neil.