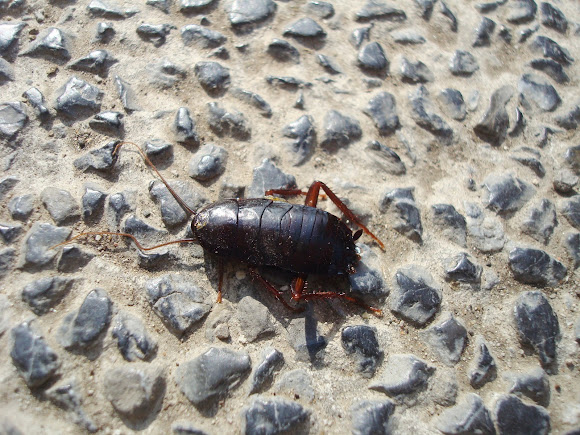 It is a large species of cockroach, measuring about 2.5 cm in length at maturity. It is dark brown to black in colour and has a glossy body. The female Oriental cockroach has a somewhat different appearance to the male, appearing to be wingless at casual glance but has two very short and useless wings just below her head. She has a wider body than the male. The male has long wings, which cover a majority of his body and are brown in colour, and has a more narrow body. The odd male is capable of very short flights, ranging about 2-3 m. The female oriental cockroach looks somewhat similar to the Florida woods cockroach, and may be mistaken for it.

The oriental cockroach tends to travel somewhat more slowly than other species. They are often called "waterbugs" since they prefer dark, moist places. They can often be found around decaying organic matter, and in sewers, drains, damp basements, porches, and other damp locations. They can be found outside in bushes, under leaf groundcover, under mulch, and around other damp places outdoors.