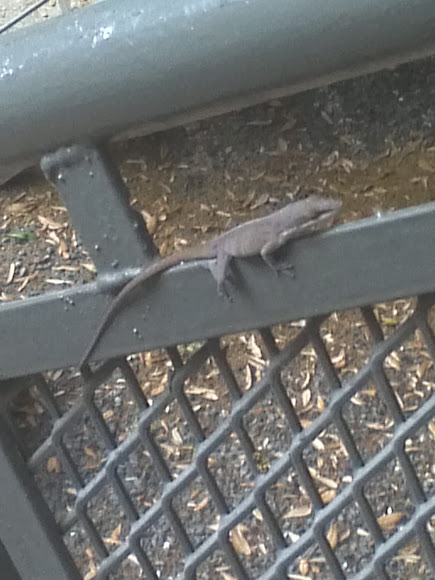 A lizard found in warm climates. They have no eyelids, but a transparent membrane. They have specialized toe pads that enable them to climb smooth and verticle surfaces. They are welcomed guest which feed on mosquitoes. They are usually nocturnal but will sun themselves. Mediterranean House Gecko or common house gecko (not to be confused with the Asian species of the same name) is a small, nocturnal gecko common to the Mediterranean and spread to many parts of the world. It is also commonly referred to as the Turkish Gecko as it is represented in its Latin name Hemidactylus turcicus. They are nocturnal and insectivorous, rarely exceeding 15 centimetres (5.9 in) in length, have large, lidless eyes with elliptical pupils, and yellow- or tan-colored skin with black spots, often with stripes on the tail. Their bellies or undersides are somewhat translucent. In countries where the species has been introduced, they are not considered invasive due to their habits and small size; they rarely threaten populations of native animals. Voracious predators on moths and small roaches, they are attracted to outside lights in search of them. They emit a distinctive, high-pitched call somewhat like a squeak or the chirp of a bird, possibly expressing a territorial message. In many parts of the world the range of H. turcicus is increasing, and unlike many other reptiles, they appear to be highly resistant to pesticides. The increase may be explained as a consequence of having few predators in places where they have been introduced, and also of their tendency to take shelter in the cracks and unseen areas of human homes, for example inside walls. Reliance on human habitation has thus contributed to their proliferation, similar to rodents.

Balcony at an apartment with lots of potted plants

I am not sure of which genus this one is.

Sure, Nadja, no problem. It's definitely not a house gecko though. It is probably more close to Jamie's suggestion of a Cuban Brown Anole lizard. I think it's a lizard and not a gecko because most geckos are fairly small (with the exception of the tokay) and don't have as scaly looking skin as lizards. I'm not a reptile expert but just wanted to suggest this was a lizard and not a gecko. Sorry I couldn't be of more help but I can try to answer any other questions you have.

It could also be a Green Anole, which also have the ability to change thier color from vivid green to deep brown to gray...

It looks to me to be a Cuban Brown Anole lizard. If you look at my spottings you will see many of these lizards. Just note that thier color can go from chocolate brown with tiny white speckles to a very light gray depending on thier mood & or temp. Check em out ;)

Thank you. why do you think it is a lizard and not a gecko? Trying to learn and would appreciate the comments.

You're lucky to have reptiles on your balcony. I wish I did! This looks to be a lizard though and not a gecko, but I'm not sure which species. Welcome to Project Noah NadjaJ.Bem.