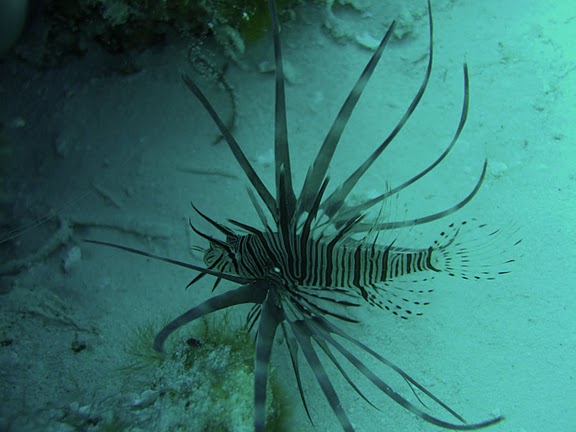 The red lionfish is part of the family Scorpaenidae, order Scorpaeniformes, and suborder Pteroidae. Lionfish have distinctive red, maroon, and white vertical stripes. Fleshy tentacles protrude from above the eyes and below the mouth. The fish have fan-like pectoral fins with venomous spines, 13 long separated dorsal spines, and 3 anal spines. Lionfish larvae are planktonic, and adults can be as large as 17 inches (43 cm) in length.[1] Lionfish generally inhabit rocky and coral reef areas, and can be found at depths between 1 metre (3.3 ft)in shallow mangroves and 131.5 metres (431 ft). They are most often found under ledges or in shaded cave areas, in an almost motionless state.

P. volitans is natively found in the Indo-Pacific region, but has become a huge invasive problem in the Caribbean Sea and along the East coast of the United States along with a similar species, Pterois miles.

Was so glad to get to see one, even though they are destroying the coral in the carribean, I was at about 50ft and I was looking at the coral wall under me and I saw this guy maybe 10- 15ft below me. They are a problem in Bonaire aswell.