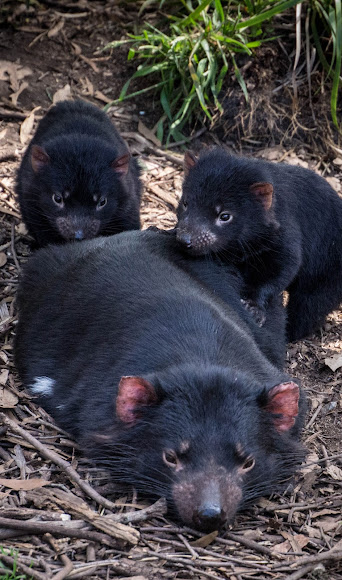 Tasmanian devils are small marsupials with ratlike features, sharp teeth and coarse black or brown fur Average devil size - The Tasmanian devil is just 20 to 31 inches (51 to 79 centimeters) tall and weighs only 9 to 26 lbs. (4 to 12 kilograms) At birth, the imps(devil pups) must race to the mother's pouch, where they compete for one of her four teats. Only those four will have a chance of surviving; the others will die due to malnourishment. Babies stay in their pouch for four months. Once they come out, they are weaned, and the mother will carry the imps on her back. By eight to nine months, the imps are fully grown

Whilst they are still in the forests and wild ...there number is dropping , why there is so many places in tasmania and australia taking part in breeding in captivity. Inhabiting coastal scrub and forest areas, they make their dens anywhere they can safely sleep during the day, including hollow logs, old wombat burrows, and naturally-formed caves. Trowunna Wildlife Park has been recognized for meeting positive animal welfare outcomes....part of the (ZAA) Accreditation Program

Very few wild devils live longer than 5 years. In captivity, they may live a few more years. Trowunna wildlife center has 15 new (imps) pups this breeding season - 5 generations in the park at present. Its very exciting. The greatest current threat to numbers across Tasmania is the Devil Facial Tumour Disease (DFTD). It’s a fatal condition that is restricted to devils, characterised by cancers around the mouth and head. Conservation - The Tasmanian devil is protected on the island of Tasmania. Efforts have been made to sustain their population there. Being hit by cars is a major case of death for the devils, as they often feed on roadkill. The Tasmanian devils are also susceptible to Devil Facial Tumour Disease, which has dramatically decreased the population in the past 10 years. As such, they have been listed as endangered by the IUCN Red List.

Congrats Charlie on the SOTD

Congratulations on the SOTD Charlie

Oh exciting Yasser ..thankyou so much for featuring these cuties and their Mumma :)
Thankyou so much everyone , so glad you have all enjoyed and taken some new information about them.
YES..Lori ...all 15 are with their mums at Trowunna ..its awesome and exciting...great breeding this year. I have a friend at Table Cape that has a devil on her land and her newborns are finally out and about without her ...go devils !

Awesome series CharliePrice,these guys are amazing :-) congrats on the well deserved SOTD and thanks for sharing

Great to see them still with their mum, Charlie. The only little ones I've seen are hand reared. Hoping to get out to Maria Island soon and spot a few devils in the wild (haven't been to Maria since they were released there). They certainly are little imps.

Charlie, this awesome and informative series has earned you another well-deserved Spotting of the Day! Congrats! Thank you for sharing so many incredible wildlife encounters with us and we can't wait to see what you spot next.

They look like angels to me not at all devils .... so lovely series Charlie....

Yes Daniele , all the devils in this conservation park are DFTD free :)

They are so sweet

Fantastic series and info Charlie! Are these DFTD-free?

They get called joeys, puggles, pups and numerous other names , but the care ranger's here called them "Imps" ...all day yesterday. :)

Your welcome Ernst ..i wish i could have gotten photos of another 3 , that have just left their mothers pouch ..but they are still a bit shy . These little ones pictured are 15 weeks old .

Are the pups really called 'imps'? I guess if you're a devil, then imp is so appropriate. Great spotting, Charlie. Excellent photos and info.