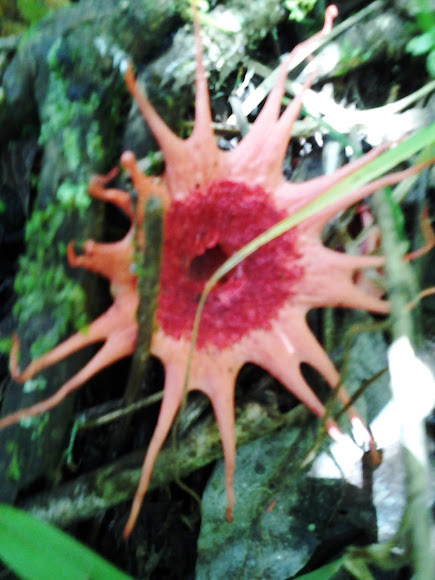 is a common and widespread basidiomycete fungus recognizable for its foul odour of carrion and its sea anemone shape when mature. Found in gardens on mulch and in grassy areas, it resembles a red star-shaped structure covered in brownish slime on a white stalk. It attracts flies, which spread its spores. It begins as a partly buried whitish egg-shaped structure 3 cm (1¼ in) in diameter, which bursts open as a hollow white stalk with reddish arms erupts and grows to a height of 10 cm (4 in). It matures into a reddish star-shaped structure with six to ten arms up to 3.5 cm (1½ in) long radiating from the central area. These arms are bifid (deeply divided into two limbs). The top of the fungus is covered with dark olive-brown slime or gleba, which smells of rotting meat. There is a cup-shaped volva at the base that is the remnants of the original egg

This fairly common fungus is widely distributed in Australia from southeastern Queensland through New South Wales and eastern Victoria and Tasmania. It is also found across the islands in the Pacific Ocean. A saprotroph, it is found on decomposing plant matter as well as on woodchips and mulch and is common in gardens and amenities plantings. It also occurs in alpine grasslands and woodlands.[6] From its natural habitat it appears to have travelled to other parts of the world in garden or soil products; it was recorded growing on soil transported from Australia in a glasshouse in Kew Gardens in 1829[7] and later in California in North America. Transport in garden or soil products does not explain its presence on remote Pacific islands or its occurrence in South Africa in localities remote from any garden. These unexplained localities cast doubt on the assumption that the species was spread from Australia and New Zealand by humans. Recently, A. rubra var. zeylanica which differ in size (3-4.5 cm diam.) and salmon pink to reddish orange unbranched arms or tentacles, has been reported from the Western Ghats, Kerala, India . This fungus is distributed in the semi-evergreen to evergreen forests and Eucalyptus stands at high ranges