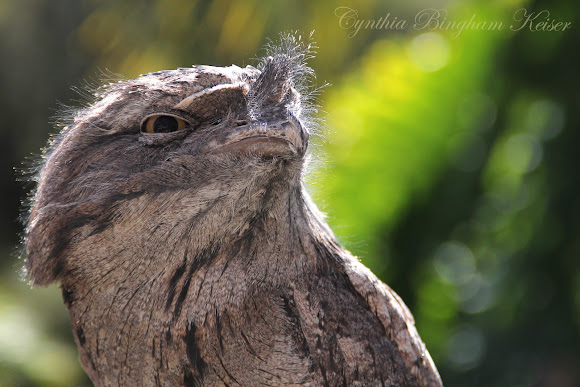 Brown hookbill bird with a frog-like gape. This one has long feathers that stick out between the eyes. "Males and females look alike and are 35–53 cm (14–21 in) long. This very bulky species can weigh up to 680 grams (1.5 lbs) and, in overweight zoo specimens, up to 1400 grams (3.1 lbs). This species thus reaches the highest weights known in the Caprimulgiformes order." - Wikipedia

This species is commonly mistaken as an Owl. "The Tawny Frogmouth is almost exclusively insectivorous, feeding rarely on frogs and other small prey. They catch their prey with their beaks rather than with their talons, another way in which they are different from owls. Owls fly around at night hunting food, but Tawny Frogmouths generally remain sitting very still on a low perch, and wait for food to come to them. They catch prey with their beaks, and sometimes drop from their perch onto the prey on the ground. The bird's large eyes and excellent hearing aid nocturnal hunting" - Wikipedia

What an unusual bird!

Hi Ava, we arrived about 10am and it was near the entrance in a green, roped off area where they show various animals. I have no idea where it's kept other times of the day.

Cool! Where, and at what time, was this animal encounter?