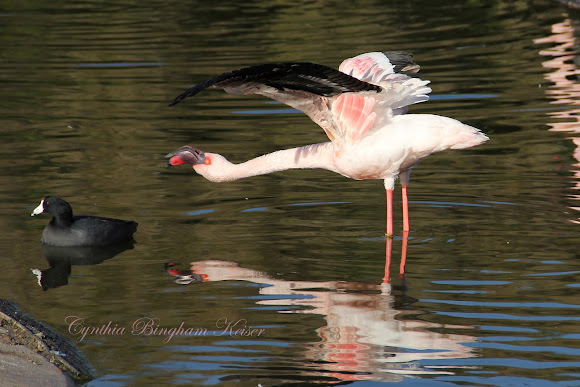 "This is the smallest and most numerous flamingo, probably numbering up to two million individual birds. They generally weigh 4.5 lb (2.0 kg), are 3 ft long, stand 3 ft 3 in (0.99 m) tall, and have a wingspan of 3 ft 3 in (0.99 m). Most of the plumage is pinkish white. The clearest difference between this species and Greater Flamingo, the only other Old World species, is the much more extensive black on the bill. Size is less helpful unless the species are together, since the sexes of each species also differ in height." - Wikipedia

Odd fact: "Many molecular and morphological studies support a relationship between grebes and flamingos." - Wikipedia

Thank you both! I think this one was doing yoga :)