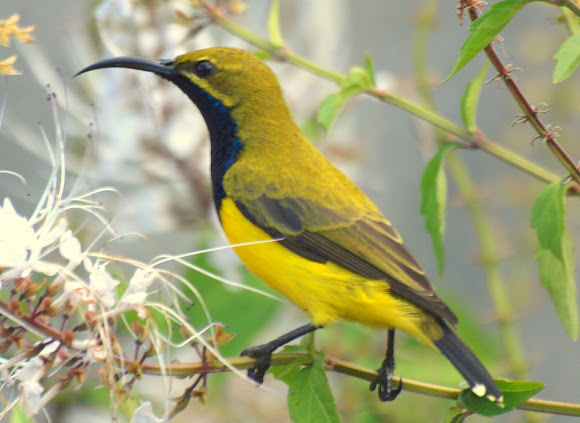 Yellow Bellied Sunbirds have an olive-brown head, nape, back and wings, and a yellow belly, vent and eye stripe. All birds have a black bill and legs and a dark eye. Adult males have an iridescent blue throat, which in immature males starts to appear as a dark stripe from the throat to the belly. Females are completely yellow from throat to vent, with juveniles being similar to adult females but with a shorter tail and a puffy yellow gape.

Rainforest, mangroves, thick coastal vegetation, parks and gardens, areas around houses and buildings. They are particularly fond of vegetation edges, and patches of flowering plants.

Range: Olive-backed Sunbirds occur in coastal far-north Queensland from the tip of Cape York to the Gilbert River on the west side, down to 1770/Agnes Waters on the east coast. They are not endemic to Australia, and are also known to occur from southern China through southeast Asia, Phillipines, Malaysia, Indonesia, and PNG. There are many subspecies within this range, several with major plumage differences to the Australian birds. Breeding: Nesting from June/July through to March. Nest is spindle-shaped with a long tail and a dome nest at its centre. Entrance to the nest is on the side, with a hood for protection. Nest appears quite messy, made from matted plant fibres, grass, bark, and lichen with spider silk and insect casings and droppings. Inside the nest is neat, lined with soft plant material and feathers. Nest is usually suspended from a thin branch or twig, a few metres off the ground, but can be higher up. Nests are also made on human structures such as telephone/power lines, clotheslines, rope, under eaves or inside open structures like sheds. They are prolific breeders, with two, three or even more breeding attempts each year. Clutch size is two eggs, very occasionally three. Eggs are pale grey to greenish-grey, with a slightly glossy surface and dense speckling, getting denser and darker at the large end. Markings can also include smudges and large spots of brown or dark olive colour. Egg size is ~17mm x 12 mm.