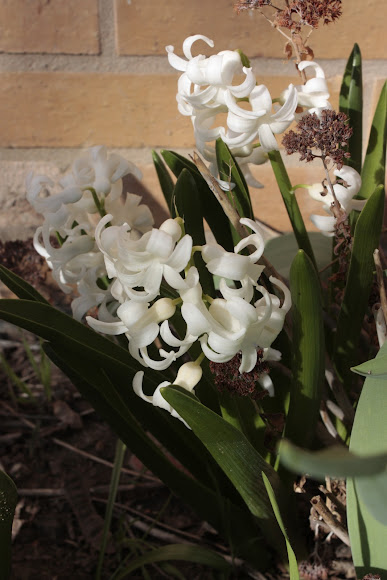 Perennial flowering plant, native to southwestern Asia, southern and central Turkey, northwestern Syria, Lebanon and northern Israel. It was introduced to Europe in the 16th century. It is a bulbous plant, with a 3–7 cm diameter bulb. The leaves are strap-shaped, 15–35 cm long and 1–3 cm broad, with a soft, succulent texture, and produced in a basal whorl. The flowering stem grows to 20–35 cm (rarely to 45 cm) tall, bearing a spike of 2–50 fragrant purple flowers 2–3.5 cm long with a tubular, six-lobed perianth.

In Greek mythology, Hyakinthos was a young man admired by Apollo and Zephyr, but killed by a discus in a jealous fight between the two gods; a flower was allegedly named after him when it sprang from his blood.