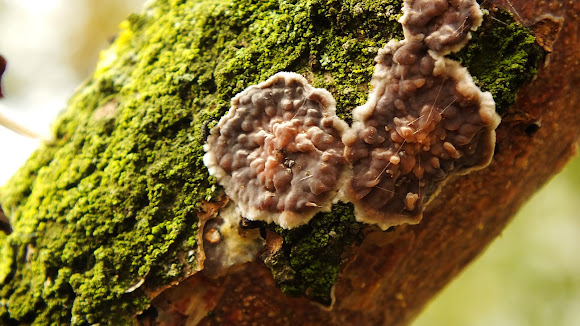 Peniophora quercina produces resupinate fruit bodies which vary in appearance depending on whether they are wet or dry. They are up to 0.5 mm thick, and form irregular patches that sometimes measure several centimetres across. Initially, the species forms small, disc-shaped fruit bodies through holes in bark, but these expand and merge to form the irregular patches. When fresh, the surface is reminiscient of jelly or wax, and can be smooth or warty, varying in colour from a dull blue to lilac. Initially, they are firmly attached to the wood on which they are growing, but as they dry, the edges roll inwards and reveal the dark brown or black underside. The dry specimens have a crusty and slightly fissured surface, and, in colour, are a bright pink or grey, tinted with lilac. There is a relatively thick layer of gelatinous flesh. Apart from a brown layer close to the wood, the flesh is hyaline. The species has no distinctive odour or taste, and is inedible.

Peniophora quercina typically grows upon dead wood, which can be attached to the tree or fallen, where it causes white rot. It favours oak, but can also be found on other deciduous trees, such as beech. Peniophora quercina is known to be a pioneer species on dead wood, which means it can be the first species to grow. The species has also been identified in living sapwood, though it is latent at this time, and it is probable that it waits until the wood begins to die before the mycelia begin to grow.