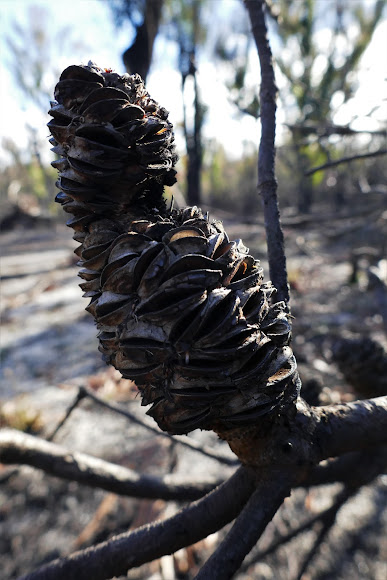 In the aftermath of February's devastating bushfires, new life is starting to emerge. Banksias cope pretty well with fire, and there's plenty of ash for new seeds to germinate in. The New England banksia is a species of woody shrub of the genus Banksia in the Proteaceae family, and is native to Queensland and New South Wales in eastern Australia. The flowers are quite striking when in full bloom, and are very similar in appearance to the hairpin banksia (Banksia spinulosa), although now recognised as a separate species. Here's my first spotting of the flower - https://www.projectnoah.org/spottings/16...

Spotted along the Mt. Norman Track in Girraween National Park, on the southern side of Mt. Norman. I saw hundreds of burnt shrubs. Growing amongst larger native eucalypt species. Sunny aspect and subject to extreme conditions - freezing cold (sometimes snow) in winter, and intense heat in summer. The entire area has just undergone massive bushfires, and drought conditions still prevail.

New England banksia occurs in two distinct forms. It is commonly a shrub with up to ten stems and an underground lignotuber but sometimes a single-stemmed small tree with a lignotuberous swelling just above or just below soil level. The former occurs in areas that are prone to bushfire, have few infructescences per plant and retain their seeds in the fruit until the shrub is burned. The single-stemmed form is found in areas such as the Lamington National Park where fire is rare, and these plants have many infructescences which release their seeds as the fruit matures. (Wikipedia) The importance of fire - https://www.natureconservation.org.au/wp...